Why Do We Need the Equal Rights Amendment?

Most Americans think there is a provision in the Constitution protecting women from discrimination, but that does not exist.

Ironically, we have insisted that other countries, such as Afghanistan, include such a provision.

Uniform Laws, with no Rollback:

State laws are not uniform. and federal laws are not comprehensive.
These laws can be, and often have been, weakened or repealed by a single vote.

Reduced Proof of “Intent to Discriminate”

Today Women have to prove “intent to discriminate”, a much higher legal standard than the “strict scrutiny” required if we have #ERA equal rights under the constitution.

Equal Standing on the World Stage

The solution? Put the ERA into the US Constitution.

Guarantee equal rights under the law for all Americans. Amending the US Constitution requires that ¾ of state legislatures ratify the amendment. 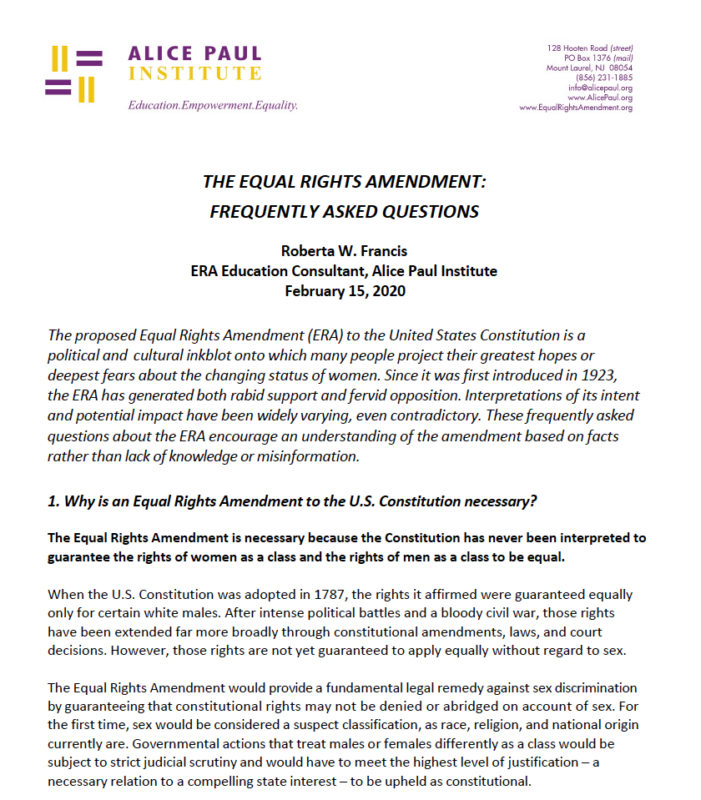 The Alice Paul Institute issued an updated 14 pages of FAQ’s and answers regarding the ERA.  Well worth reading and sharing.  Download the PDF hereERA-FAQs-updated-06-16-2020

Why not the 14th Amendment

The Equal Rights Amendment is needed to affirm constitutionally that the bedrock principles of our democracy — “all men are created equal,” “liberty and justice for all,” “equal justice under law,” “government of the people, by the people, and for the people” — apply equally to women.

It was not until as recently as 1971 that the 14th Amendment’s equal protection clause was first applied to sex discrimination. Even today, a major distinction between the sexes is present from the moment of birth — the different legal standing of males and females with respect to how their constitutional rights are obtained. As demonstrated in 1996 by the last major Supreme Court decision on sex discrimination, which dealt with admission of women to Virginia Military Institute (VMI), we have not moved beyond the traditional assumption that males hold rights and females, if treated unequally, must prove that they hold them. The Equal Rights Amendment would remove that differential assumption.

The practical effect of this amendment would be seen most clearly in court deliberations on cases of sex discrimination. For the first time, “sex” would be a suspect classification requiring the same high level of “strict scrutiny” and having to meet the same high level of justification — a “necessary” relation to a “compelling” state interest — that the classification of race currently requires.

We need the ERA to clarify the law for the lower courts, whose decisions still reflect confusion and inconsistency about how to deal with sex discrimination claims. If the ERA were in the Constitution, it would in many cases influence the tone of legal reasoning and decisions regarding women’s equal rights, producing over time a cumulative positive effect.